Founded in 1995, XDS Shenzhen Xidesheng Bicycles Co., Ltd. is a bicycle enterprise that specializes in the integration of R&D, manufacturing, sales, and services. Over the last 24 years of development, XDS has become the leader in Chinese bicycles with excellent products and superb ultra-light technology.
XDS has an international production base for ultra-light bicycles and is the largest manufacturer of carbon-fiber bicycles in the world. XDS has the first "Bicycle Eco Theme Park" factory and the first enterprise self-built UCI international standard mountain bike course in the world. They also have the bicycle industry's first postdoctoral workstation and a laboratory which has been certificated by a world certification authority, Germany's TUV. They have been awarded over 300 international and national patents, and have won many international bicycle invention awards. XDS which consists of the world's largest carbon-fiber manufacturing company and large-scale aluminum manufacturing workshops. With the industry's most advanced equipment and manufacturing techniques, they can produce over 5 million bicycles annually.

BMB Steel has chosen to be a steel contractor to build a factory for XDS Shenzhen Xidesheng Bicycles Co. located in Cambodia. We are not only design, manufacture, supply but also build this hall with the highest standards of American for this project.

This photo below is about this project 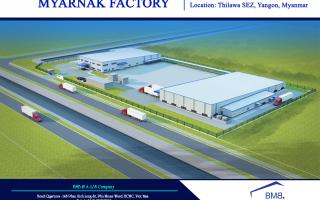 Myarnak Factory
Company News
BMB STEEL PARTICIPATED IN MYANBUILD 2019 IN YANGON, MYANMAR
MYANBUILD 2019, Myanmar’s No.1 platform for the building and construction industry will be held at Myanmar Expo...

Grand opening ceremony of the BMB Love Library in Kontum