For the time being, factories and workshops are constantly expanding their scale to meet production needs and bring the most optimal technology. The following article from BMB Steel will share with you the top of the biggest factory in the world at the present.

Volkswagen factory in Wolfsburg (Germany) is the automobile's biggest factory in the world by total area. In a year, the factory produced about 700,000 cars. Currently, the factory produces 4000 ones per day. Besides, the factory has more than 70,000 workers working here. Due to the large area of the factory, the company provides each worker with a bicycle to move between factories. In addition to the main company, Volkswagen, which we often know, the company is also the place to produce other automobiles such as Bentley, Audi,... The company’s outstanding product is the supercar Lamborghini, which makes many customers amazed.

Located in the middle of the vast and barren Nevada desert. This is a project that shows Elon Musk's great aspirations for the future of Tesla. With the existing area, it can be said that the Gigafactory is 107 times larger than the NFL football field. Simultaneously, the factory was built up to standards with 4 floors of the factory and 2 floors set as offices at the top.

Tesla has set its hopes that from 2018 onwards, Gigafactory is the biggest factory that can produce no less than 150 GWh. To serve enough for 1.5 million models 3 units per year.

Hyundai Motor Factory is the biggest factory of a pre-engineered steel factory styles which is built and manufactured in the southern region of Korea with a huge area of ​​more than several million m2. Besides, it is on a land area of ​​1,225ha. Particularly, it is divided into 5 separate factories. According to the above information from the factory, an automobile is produced every 12 seconds. It means that the annual production is about 1.53 million cars.

Along with many other systems such as a fire service areas, sewage treatment plants, and road systems, the factory is also equipped with a separate hospital for the medical examination and treatment of its employees.

Another outstanding feature is that the factory has more than 500,000 trees. Hence, the surrounding air of the factory is fresher. Furthermore, the factory has an exclusive pier that can accommodate 3 cargo ships with a capacity of 50 tons moored at the same time. This shows that this is a very spacious pier.

The Jean-Luc Lagardère factory was built in a short time ( just 3 years from 2001 - 2004). Under pressure to quickly create an assembly place for Airbus A380 aircraft. This is the largest plane in the world that many people know.

After completion, Jean-Luc Lagardère is the biggest factory owns a corridor up to 115m wide and 250m long. Specifically, it is 46m high and there are 6 small rooms with the size of 100mx100m.

In addition to the assembly area, the factory is also equipped with a test flight runway up to 200,000 m2. Jean-Luc Lagardère pre-engineered steel factory is considered one of the top 8 largest steel frame factories in the world.

Referring to the textile industry, Lauma Fabrics is known as the largest company for the time being. To produce a large variety of laces for underwear and raw materials. In 1965, Lauma commenced construction of the Liepaja factory and officially completed it in 1977.

With a width of 225m and a length of 505m, it is considered the largest textile factory in the world. Currently, to serve the needs of the market throughout Central Asia and Eastern Europe, the factory which specializes in manufacturing thread lace products owns 5,000 workers..

Lauma is also the 9th biggest factory in the world.

Many experts consider Belvidere to be one of the three largest pre-engineered steel factories in the United States. It was built in 1965 with a fairly large area of up to 330,000m2. Currently, Belvidere is the biggest factory of Fiat Chrysler has over 5,100 workers. Simultaneously, it is equipped with up to 780 automatic working robots to serve the needs of assembling vehicles such as Jeep Patriot, Jeep Compass, and Dodge Dart. Belvidere deserves to be a factory with the most advanced technology in the world.

Boeing is widely known as the birthplace of the famous Boeing 747, 767, 777,787 Dreamliner aircraft. Boeing Factory is the biggest factory that manufactures and supplies aircraft. It is also the world's largest pre-engineered steel plant for the production of aircraft. The factory was built in 1966 right after Boeing received an order for 25 747 aircraft from Pan American World Airways.

To meet production activities, the factory built a separate railway line, a tunnel system up to 3.8km long. At the same time, workers are provided with 1,000 bicycles to move around the entire factory area. Currently, the number of employees working in the factory has reached 30,000 people. Their main jobs are assembling and manufacturing engines as well as ensuring security for the production process.

Built in 1966, this is the only place that can assemble rockets that send people into space. It was built after 3 years when the US announced the successful journey to put the man on the moon.

This assembly center is a huge impression of its grandeur and magnificence. In particular, this is also the world's largest one-story building with a height of more than 160m. There are buses carrying equipment and launchers that make visitors admire and whisper.

Although it only ranks 10th in the list of the largest buildings in the world, it has a volume of up to 2,664,883 m3. The building is built with 4 corridors. The highlight is the door frames, which are up to 139 m high. It takes 45 minutes to fully open the door. It can be said that this is a pre-engineered steel factory project with a beautiful and exceedingly majestic design.

This is a factory owned by Mitsubishi Corporation North America. However, in January 2017, it was sold to the start-up company Rivian Automotive. This pre-engineered steel factory was built in 1981. It is considered a huge construction with lots of surrounding areas. It includes offices, automobile paint workshops, production areas along with a lot of modern machinery and robotic equipment.

From the first quarter of 2019, it is expected that this will be the place to produce Rivian's first electric self-driving vehicles.

Meyer Werft Dockhalle 2 is a large and impressive pre-engineered steel factory with a floor area of ​​​​up to 63,000m2... Therefore, it is rated as the largest covered factory in the world with the main purpose being used for the construction of cruise ships.

Specifically, the largest factory in this complex has a height of 75m, a length of 504 m and a width of up to 125m.

The Meyer Werft Dockhalle 2 built in Papenburg makes a lot of sense. It not only helps to preserve the historical development of shipbuilding, but also gives the town a presence in the international market.

The factory is developed by a large number of workers up to 2000 people. Particularly, only 25% of employees are directly involved in machine manufacturing. The factory's main role is to assemble ships. In addition, the ship's parts will be manufactured at the suppliers. In which, the factory has links with 2000 main and subcontractors. Meyer Werft Dockhalle 2 is divided into 4 work categories as follows:

Hopefully, with the top 9 international largest pre-engineered steel factory projects above, readers will have more useful information. If you need to update more new news, don't forget to visit bmbsteel.com.vn so as not to miss any valuable articles. 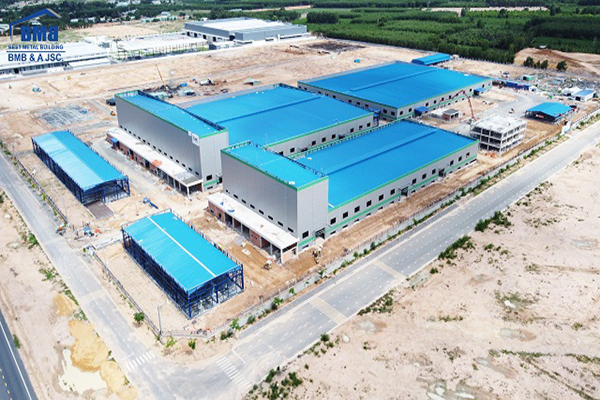 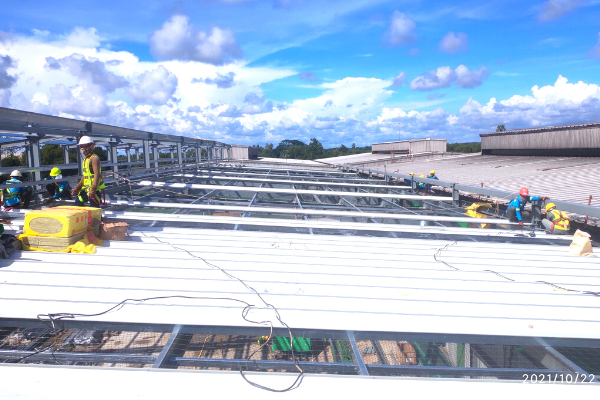